Portage River Readers is a book discussion group that meets at the Pemberville Library. Meetings are held on the third Tuesday of each month at 7:00 p.m. Discussion books are available for checkout at the library approximately a month before the discussion is held. New members are always welcome!

Summary: From the beet fields of North Dakota to the campgrounds of California to Amazon’s CamperForce program in Texas, employers have discovered a new, low-cost labor pool, made up largely of transient older adults. These invisible casualties of the Great Recession have taken to the road by the tens of thousands in RVs and modified vans, forming a growing community of nomads.

Nomadland tells a revelatory tale of the dark underbelly of the American economy—one which foreshadows the precarious future that may await many more of us. At the same time, it celebrates the exceptional resilience and creativity of these Americans who have given up ordinary rootedness to survive, but have not given up hope.

The Sound of Gravel

Summary: Ruth Wariner was the thirty-ninth of her father’s forty-two children. Growing up on a farm in rural Mexico, where authorities turned a blind eye to the practices of her community, Ruth lives in a ramshackle house without indoor plumbing or electricity. At church, preachers teach that God will punish the wicked by destroying the world and that women can only ascend to Heaven by entering into polygamous marriages and giving birth to as many children as possible. After Ruth's father—the man who had been the founding prophet of the colony—is brutally murdered by his brother in a bid for church power, her mother remarries, becoming the second wife of another faithful congregant.
In need of government assistance and supplemental income, Ruth and her siblings are carted back and forth between Mexico and the United States, where her mother collects welfare and her stepfather works a variety of odd jobs. Ruth comes to love the time she spends in the States, realizing that perhaps the community into which she was born is not the right one for her. As Ruth begins to doubt her family’s beliefs and question her mother’s choices, she struggles to balance her fierce love for her siblings with her determination to forge a better life for herself. Recounted from the innocent and hopeful perspective of a child, The Sound of Gravel is the remarkable true story of a girl fighting for peace and love. This is an intimate, gripping tale of triumph, courage, and resilience.

Summary: In New York Times, bestselling author Linda Castillo’s new thriller Fallen, a rebellious Amish woman leaves the Plain life, but the secrets she takes with her will lead Chief of Police Kate Burkholder down a dark path to danger and death. When a young woman is found murdered in a Painters Mill motel, Chief of Police Kate Burkholder is  shocked to discover she once knew the victim. Rachael Schwartz was a charming but troubled Amish girl who left the fold years ago and fled Painters Mill. Why was she back in town? And who would kill her so brutally? Kate remembers Rachael as the only girl who was as bad at being Amish as Kate was— and those parallels dog her. But the more Kate learns about Rachael's life, the more she's convinced that her dubious reputation was deserved. As a child, Rachael was a rowdy rule breaker whose decision to leave devastated her parents and best friend. As an adult, she was charismatic and beautiful, a rabble-rouser with a keen eye for opportunity no matter who got in her way. Her no-holds-barred  lifestyle earned her a lot of love and enemies aplenty—both English and Amish. As the case heats to a fever pitch and long-buried secrets resurface, a killer haunts Painters Mill.  Someone doesn’t want Rachael’s past—or the mysteries she took with her to the grave—coming to light. As Kate digs deeper, violence strikes again, this time hitting close to home. Will Kate uncover the truth and bring a murderer to justice? Or will a killer bent on protecting a terrible past stop her once and for all—and let the fallen be forgotten?

Summary: Recruited by the U.S. Army and Navy from small towns and elite colleges, more than ten thousand women served as codebreakers during World War II. While their brothers and boyfriends took up arms, these women moved to Washington and learned the meticulous work of code-breaking. Their efforts shortened the war, saved countless lives, and gave them access to careers previously denied to them. A strict vow of secrecy nearly erased their efforts from history; now, through dazzling research and interviews with surviving code girls, bestselling author Liza Mundy brings to life this riveting and vital story of American courage, service, and scientific accomplishment. 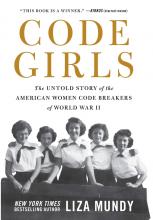 Summary: A remarkable novel about J. P. Morgan’s personal librarian, Belle da Costa Greene, the Black American woman who was forced to hide her true identity and pass as white in order to leave a lasting legacy that enriched our nation, from New York Times bestselling authors Marie Benedict and Victoria Christopher Murray.

In her twenties, Belle da Costa Greene is hired by J. P. Morgan to curate a collection of rare manuscripts, books, and artwork for his newly built Pierpont Morgan Library. Belle becomes a fixture in New York City society and one of the most powerful people in the art and book world, known for her impeccable taste and shrewd negotiating for critical works as she helps create a world-class collection.

But Belle has a secret, one she must protect at all costs. She was born not Belle da Costa Greene but Belle Marion Greener. She is the daughter of Richard Greener, the first Black graduate of Harvard and a well-known advocate for equality. Belle’s complexion isn’t dark because of her alleged Portuguese heritage that lets her pass as white—her complexion is dark because she is African American.

The Personal Librarian tells the story of an extraordinary woman, famous for her intellect, style, and wit, and shares the lengths she must go to—for the protection of her family and her legacy—to preserve her carefully crafted white identity in the racist world in which she lives.

Sold on a Monday

The sign is a last resort. It sits on a farmhouse porch in 1931, but could be found anywhere in an era of breadlines, bank runs and broken dreams. It could have been written by any mother facing impossible choices.

For struggling reporter Ellis Reed, the gut-wrenching scene evokes memories of his family's dark past. He snaps a photograph of the children, not meant for publication. But when it leads to his big break, the consequences are more devastating than he ever imagined.

Inspired by an actual newspaper photograph that stunned the nation, Sold on a Monday is a powerful novel of love, redemption, and the unexpected paths that bring us home.

The Girl Who Fell from the Sky

Summary: Rachel, the daughter of a Danish mother and a black G.I., becomes the sole survivor of a family tragedy after a fateful morning on their Chicago rooftop.

Forced to move to a new city, with her strict African American grandmother as her guardian, Rachel is thrust for the first time into a mostly black community, where her light brown skin, blue eyes, and beauty bring a constant stream of attention her way. It’s there, as she grows up and tries to swallow her grief, that she comes to understand how the mystery and tragedy of her mother might be connected to her own uncertain identity.

This searing and heart-wrenching portrait of a young biracial girl dealing with society’s ideas of race and class is the winner of the Bellwether Prize for best fiction manuscript addressing issues of social justice.

Summary: The year was 1917. As a war raged across the world, young American women flocked to work, painting watches, clocks, and military dials with a special luminous substance made from radium. It was a fun job, lucrative and glamorous - the girls themselves shone brightly in the dark, covered head to toe in the dust from the paint. They were the radium girls.

As the years passed, the women began to suffer from mysterious and crippling illnesses. The very thing that had made them feel alive - their work - was in fact slowly killing them: They had been poisoned by the radium paint. Yet their employers denied all responsibility. And so, in the face of unimaginable suffering - in the face of death - these courageous women refused to accept their fate quietly and instead became determined to fight for justice.

Drawing on previously unpublished sources - including diaries, letters, and court transcripts as well as original interviews with the women's relatives - The Radium Girls is an intimate narrative account of an unforgettable true story. It is the powerful tale of a group of ordinary women from the Roaring 20s who themselves learned how to roar.